Swim a mile in my shoes. 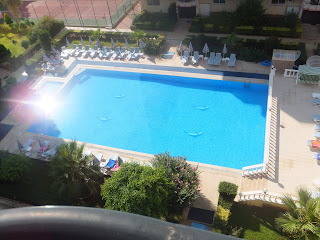 I am in the pool at around 9.30 every morning to get my swim in before the pool gets too busy. Usually there is no one there at that time. Slowly people trickle in and an hour and a half later I'm swerving to avoid gobsh***s who get in my way.
Can't you see I'm swimming up and down in this narrow strip against the wall? You have ALL of the pool to float around in. I was here first, so MOVE!
The other morning there was already a mother and little girl at the pool when I arrived down bleary-eyed but determined. The little girl was about three years old.
I adjusted my goggles, slid into the water and started my daily task.
One: When I reached the end of my first length the little girl was sitting on the steps leading down into the water.
"Hi", she greeted me.
"Hello", I replied, turned and swam off.
Two: "Hi", she grinned again, looking down on me from the edge of the pool.
"Hi", I replied, grinned and swam off.
Three: "Hi", she squealed at me again.
This is getting old.
"Hi again", and splashed off
Four: Before I even reached the end I could see her little legs waiting for me.
"Hi".
"You again! You're a very fast runner!"
Five: "Hi".

By this stage I was a bit concerned about her running up and down by the edge of the pool. Granted she had her arm bands on, so if she fell in she wouldn't drown. But she could still hurt herself if she fell on the tiles.
Primary School teacher Syndrome! Always on the lookout for potential accidents.
But her mother  had no such concerns as she lay back on her sun lounger, oblivious to her daughter's marathon effort.
Fair enough so.Not my problem. I'm on holiday.
I continued on my swim, and sure enough there she was grinning and waiting for me at each end.
By this stage I was very curious to see how long her little legs could keep it up. There was no way she could do the 80 lengths.
Hell, its a major struggle for me to do it, and my legs have had years more practise.

I can't  believe it, but she stuck with me for twenty five lengths! Eventually her little legs gave way and she copped on that if she just sat on the steps I would eventually return.
"Hi".
"Hi"

A while later she got fed up of this game and toddled off to the paddling pool.
I continued on my way.
Mam continued with her sun worshiping, oblivious to her daughter's potential for the 2032 Olympics!
at August 04, 2011