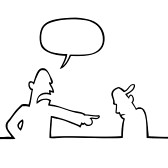 We sat ourselves down for dinner in Murat's Place the other night.
I'm talking about the restaurant, not Murat's personal pad, even though Murat is a very nice man and would probably cook you dinner in his own house if you asked him!
There was a table set for twenty beside us. Slowly but surely an extended family of Dublin people began to filter in to it. When it was about half full, a young boy of about ten joined them. Some of the other boys obviously slagged him and he gave the typical reply
"Shu' up!"
His Dad, who was sitting on the opposite side of the table, didn't like that. He chastised him
"Don't say tha."
My teacher-persona reared its ugly head.
Isn't that great to hear. A parent who will reprimand their child, even in public, and set them some proper guidelines and standards.
"Yeah", continued Dad. "Never tell anyone to shu' up.
It's fuckin' rude!"
Oh dear. Is it nearly September yet?
at August 14, 2011