I got this great story from my friend Tony. Just had to share it!

He has been friends with a French woman for many years.She lives in rural Rhone valley and Tony has stayed with her and her husband many times over the past few years.In short he owes them, though they would never see it like that.
Anyway she rang him during the week and gingerly asked if her 23 year old niece, who was visiting Ireland, could stay with him the following week. Tony was only too happy to oblige after all their hospitality to him the years.
Well, so he says. Personally I think it had more to do with the fact that she is a 23 year old French babe!
Plans were made. Tony was to collect her at the airport but as he had never met her or even seen photos this posed a minor problem. Her aunt suggested that although it may be a bit naff  the easiest thing to do might be to hold up one of those signs at arrivals.
"That sounds good", said Tony. "What is your niece's name?"
"Fanny."..............
There was silence at the Irish end of the phone while Tony tried not to choke!
"Em, okay," he stuttered.

Yesterday was pick-up day. He played around with various signs that he could possibly hold up. 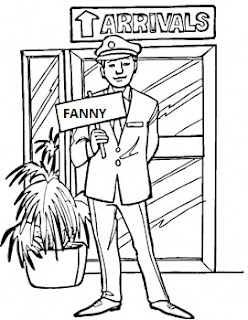 Oh the possibilities were endless!
I pleaded with him to take a photo for my blog but he declined! I also suggested that he bring a bus with him just in case he struck it  really lucky.
That was yesterday. So far I have heard nothing back from him!!!
at August 09, 2011