The Further Adventures of Noeleen and Seán Óg

Today myself and Seán Óg decided to leave Mahmutlar and head out the country. Anyone who knows me at all will begin to panic at this stage as they know that I have zero sense of direction and still get lost in Raharney.
Okay, that’s total exaggeration, but you get my drift.
There were many little roads leading off in all directions but I wisely decided to stick to the road that had the big yellow line down the middle of it. At least then all I had to do was follow it back home.
We’re not in Kansas now, Toto.
It was a HOT day, but it was fab whizzing downhill on Seánie.
Not so great going up the blasted hills.
We arrived in the neighbouring village of Kestel. It’s a quaint little place compared to Mahmutlar. 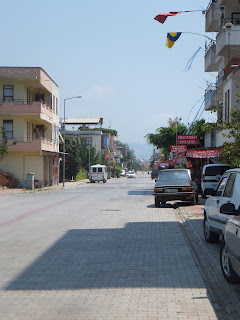 I espied the sea down a side road and we veered off the main path. There was a lovely beach, if you could ignore the rubbish strewn all over the place. 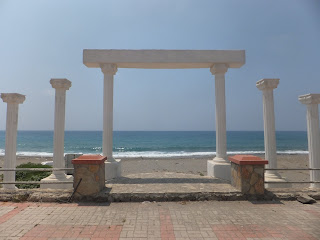 I really wanted to walk in the sea, but what was I to do with Seán Óg? I left him handcuffed to a railing and hoped he’d still be there when I got back!

It was invigorating standing in the sea.. The waves were very powerful and nearly dragged me in a couple of times. I almost had a Cinderella moment. There was a pebble caught in my sandal and I had to take it off. A wave came in and swept it away. There was a mad panic to get it back as I didn’t want to have to pedal barefoot back to Mahmutlar. 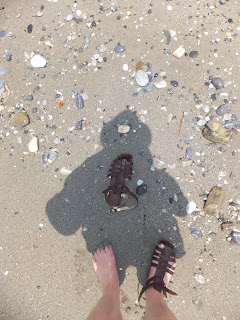 We headed back home through the village where both Seán Óg and I made new friends!
Two little boys started cycling beside us. I had no Turkish and they had no English but we all instinctively knew that a downhill race was in order! Off we whizzed. Of course I let them win! How cruel do you think I am? I deliberately went slower as the little fella on the back almost did himself irreparable damage as he was practically sitting in the rear mudguard! 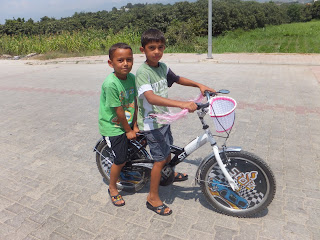 At the finishing line I opened my purse and gave them their winnings of a lira each! You should have seen their faces light up. I felt like a cross between Bob Geldof, Mother Theresa and Santa Claus! The two boyos sped off, obviously to tell all the other kids in the village that there was a weird women giving away money. I legged it down the road before I began competing in the juvenile Tour de Turkey!!

Nearer to home I spotted a little shop tucked away at the side of the road. I was in a bucket of sweat by this stage and so I stopped. When the owner slid back the door of the ice-cream freezer I nearly climbed into it! I chose an ice-cream and went to pay for it. Alas I had given my last lira to Lance Armstrong and his brother and all I had was a 20 and a 50 lira note. There was no way that this poor devil would have the change of that. I had a few tiny coins stuck in the bottom of my purse. They were so small that they couldn’t have been worth anything. I prised them out and handed them to him in my open hand. He sifted through them and took a few, indicating that it had enough. There were two coins left (worth about 2 cent, I’d say). I pushed them towards him, indicating for him to take them but he refused. I had paid enough.
He then waved his arms, raced inside and came out with a chair. He placed it in the shade and beckoned for me to sit down and eat my ice-cream in peace.
So there I sat at the side of the road, watching the occasional car or bus as it passed. That’s what I call service. 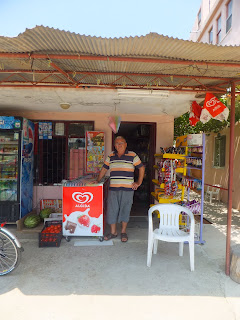 Seán Óg and I were ready for home. Mr Shopkeeper Man waved us off on our merry way.