Because I'm worth it!

Twenty nine years ago today Finian and Marese got married. Little did they think on that particular day that almost three decades later they would be spending their wedding anniversary in their apartment in Turkey.

Being the good sister that I am, I told them I would head off by myself that evening and they would have a nice romantic dinner without me. They wouldn’t hear of it.
“After twenty nine years we’ve said all we want to say to each other”.
Hmm, nice one Finian!
Of course we had to head to Passion restaurant, where else would you spend your anniversary? 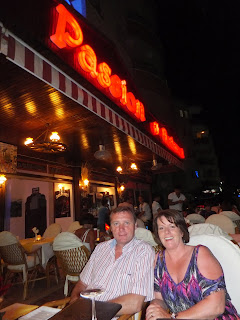 As is the norm here, you ring the restaurant and they come and collect you. Masuit was our driver/waiter/comedian. He had to ask what the story was with a man and two women. Finian hastened to explain that one was his wife and the other was his sister. The slagging started and in the heel of the hunt Finian ended up swopping me for a goat.
The recession has hit the dowry business too.
This is not the first time I have been used by my family as a bartering tool! A few years ago my mother was out here with us on holiday. She fell in love with a necklace in the local jewellers. Every day she would go in and check it out. She was hoping to get the owner to bring the price down further and further. One evening I went in with her. I got the usual question
“Are you married?”
I usually answer “Yes. And my husband is at home with the eight kids.”
But Mam didn’t know the drill and immediately said
“No. She is single.”
Well his eyes lit up like a Christmas tree! He started asking when we could meet up etc etc etc. I fobbed him off. He turned to Mam and asked
“What can I do to get your daughter to go out with me?”
It was Mam’s turn to light up.
“Well, what is the best price you can give me on the necklace and I will see what I can do!!!”

I was horrified….kinda! So that’s the value my mother puts on me! I can just see me now on an instalment of the Jeremy Kyle Show entitled
My mother pimped me out for a necklace!
To be quickly followed by
My brother swapped me for a goat!
So if in the next few weeks you happen to be driving past the Lynam residence in Raharney, and see a goat frolicking on the front lawn…..think of me stuck in Turkey with a 26 year old waiter! 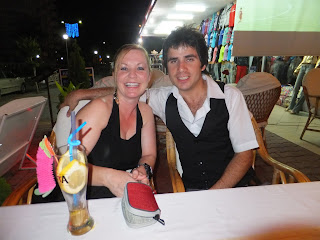