Final day of Wimbledon today. As my mum is also an avid fan, I planned on going over to her house to watch the Men's Final. Of course it wouldn't be Wimbledon without strawberries and cream. We went one better.....strawberries dipped in chocolate with cream! I didn't wake until 12.40 so there was a mad panic to melt, dip and then put in fridge to harden before the match started.
AS you can see waking up at the ungodly hour of 6.30am didn't last for very long!
I also brought a bottle of my favourite wine along. I am not a wine drinker. I like it, but it hates me! I get very ill even after a glass. Red wine is a total killer.
But a while ago I was at a friend's dinner party and she served "Bend in the River" rosé, which was lovely and had no harmful effect on me.  Several weeks later I was going to another dinner party and decided to bring a bottle of that wine.
I was wandering through the aisles of the off-licence, but to no avail.
"Can I help you?" enquired a helpful assistant.
"Yes", I replied gratefully. "I am looking for a bottle of that "Round the Bend" wine."
She stifled a smirk and asked
"Do you mean "Bend in the River"?"
"Exactly. I was thinking it was a stupid name for a bottle of wine. I mean they all do that to you if you drink enough of them!" 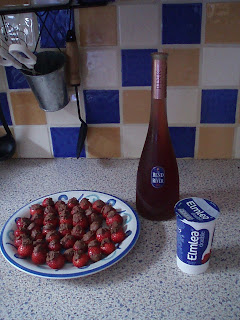 After making sure the chocolate had hardened in the fridge I loaded up my car and set off on the short journey to the other side of the village. Roxy was topless as it was a beautiful day, strawberries were on the front seat, so were  almost melted by the time I reached her house!
We had a most enjoyable time sipping wine, stuffing our faces﻿ and cheering on our favourite. Mine was Nadal and Mum was for Djokovic. So she was happier than me at the end.
So that's it all over for another year. I will end with a couple of gratuitous shots of Nadal from his Armani Campaign.
You can't beat a bit of tennis porn to finish off Wimbleton fortnight! 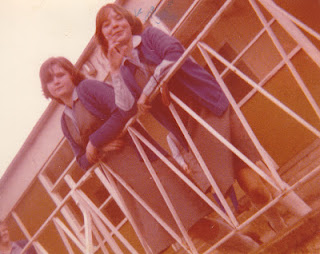