Twin it to win it

Last night saw the first semifinal of Eurovision: Dusseldorf. Having seen the calibre of the other acts I have been struck by a horrible thought.
OMG! Jedward are in with a great chance and just might win the darn thing!
After their first audition on The X-Factor I was embarrassed to say they were originated from the same country as myself. They came across as egotistical, precious little brats. But as the weeks went on, I (along with most of the country) came to realise that we had misread them. Granted they were still annoying and devoid of any talent. But they had what Simon Cowell was looking for......
..The X-Factor.
What you see is what you get. An identical pair of hyperactive twins with hearts of gold.
I know people who have worked with them in Panto and have nothing but praise for how nice they genuinely are and how much time they give to their fans.
Its just a pity they are as mad as wet hens....which is pretty mad, I assure you!
So it's nothing personal against them that I don't want them to win. It's just that.......
Where on earth would our little bankrupt country find the money to host the Eurovision next year?

Flashback to 2009
"Miss, can we have a fundraiser to help the people of Haiti?"
"That's a lovely idea. What do you suggest?"
We had the usual ideas of "Non uniform Day/ Jersay day/ cake sale.
"Ah now, who can come up with an original idea?"
"How about a Jedward Hair Day?"
Great idea. Simple but effective. Just slap on a dash of hair gel and you're sorted.
I ran the idea past my principal.
"Sounds good but our parish priest is a bit concerned about the excessive amount of fundraising that is going on in the school".
"Ah sure we just won't tell him. He'll never know".
So it was going ahead.

The next day my principal came into my room, holding the phone. He gave me a rye look and said
"I think this is for you".
I took it cautiously.
"Hello this is RTÉ. We hear you are having a Jedward Day in school tomorrow and we would like to film you for a children's news programme".
"Wha...?"
It seems that one of my pupils had e-mailed the programme to tell them of our endeavour. They too thought it was an original idea, better than the hundreds of Jersey Days that were going on around the country.
"Eh yeah, sure" I replied.
The rest of the day was spent is cleaning and rearranging the classroom.
Any teacher will tell you, no matter what the news story is about, if it is set in a classroom, every teacher in the country is examining the walls to see what is going on in that classroom.

I left the school at five o'clock and stopped off at the local chemist in search of extra strong hair products. The relevant shelves were empty. The shop assistant saw me looking bemused and said
"Are you looking for hair gel, it's all out on a special table. For some reason it's flying off the shelves!"
Mmm, that would be my fault!

I spent the evening trying to get the right hairstyle.
You would be amazed at the number of sites that you get when you google "How to look like a complete prat".

The next morning saw me arrive at my school like this.... 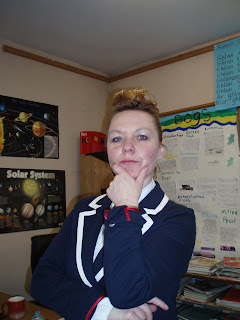 It was made all the more embarrassing by the fact that I was the only one in my class dressed like that! The film crew had asked that the kids arrive in their uniform and they would film them getting "Jedward-up".
The whole filming took over an hour.
Have you any idea what kids' hair looks like after backcombing, spraying, colouring it for that length of time.
I think we single-handedly doubled the hole in the ozone layer, over Baconstown!
We appeared on the news programme the following afternoon......all four minutes of it!
But the kids were amazing and it was a PR coup for the school!