One of my favourite incidents from a previous Big Brother series, involved a packet of biscuits. The housemates had been interred for two weeks and were just beginning to get on each others nerves. One group of housemates took and hid a packet of biscuits for their own consumption. The rest of the house went ballistic when they discovered this, and there ensued a huge row.
The behaviour expert or whatever his titile was gave a very interesting explanation. When we are in a closed environment no matter how trivial an incident is,if there is nothing else bothering us, then it expands to fill our world and become a ginormous problem.
I'd like to think that this is the reason for how I reacted this morning.
On Wednesday night we had our Confirmation rehearsal. My brother Finian, and Niall arrived with the Holy Spirit display. As it is a joint venture with two other schools, I asked the priest where we should put it, bearing in mind there were two more displays to put up. We were given our place, and Jesus was set up!
This morning I popped into the church on the way to school to check things. To be honest I was making sure that parents hadn't changed the names on the seating arrangement!
It can happen.
When I entered the church, I was stopped in my tracks. Our display had been moved to make way for another one. And it was put behind the pulpit where it couldn't be seen!
I could feel my blood begin to boil. I knew the amount of hard work and effort that Niall had put into it,slaving away during his Easter holidays
Okay. Now I'm getting melodramatic
and now it was wasted.
I wanted to change the displays back, but I knew it was unprofessional of me to do so. So I rang my principal, to get him to do it!!!!
He arrived, and soon after so did the priest. We did a bit of tweeking, got rid of a May altar, and soon all displays were being shown to their optimum advantage. Day was saved.
The ceremony went off perfectly, the kids read like newsreaders, the choir outdid themselves...and teacher calmed down in time!
I am sitting here with my feet up, drinking a cup of tea complete with dunking chocolate Hob Nobs.
What on earth was up with you this morning? You completely over reacted. It was only a feckin' display.
But in my defence, we have been living and breathing this ceremony for the past few weeks, so I had nothing else in my life to worry about.
And to misquote Patrick Swayze's immortal line in Dirty Dancing
Nobody puts Baby Jesus in the corner! 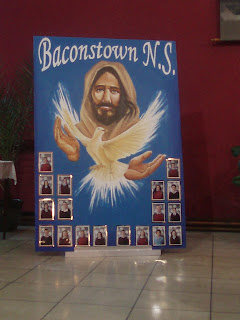