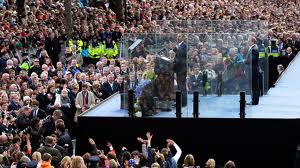 What a week for Ireland! It has to go down in the history books as the week we began to believe in ourselves again. The Queen's visit showed that (for the most part) we don't have to live in the past, Leinster's magnificiant comeback personified our never-say-die attitude and yesterday's inspirational speech by Obama made the future seem a lot less hopeless!
I will put my hand on my heart and say
I have no idea what his policies are on the economy, education, health etc. etc. etc. I also have no idea how he is fareing out in the popularity stakes back in his own electorate arena.
All I can judge him by is how he performed yesterday. And in my humble opinion, he was brilliant.
Of course he didn't outline any policies as to how we are going to get ourselves out of this mess we got ourselves into.
That's not his job. That's what we pay our own polititians to do. And by the way, Enda gets more for leading our little country than Obama gets for his!

But what he did give us was praise for what we have done and the enthusiasm to try harder.
The golden rule of Teachers!
Mol an óige agus tiocfaidh siad!

Not one of our polititians has given us an ounce of inspiration in the past two years. All we heard was how bad things are and will continue to be.  Of course they had draconian measures to implement but, in the words of Mary Poppins
Just a spoonful of sugar helps the medicine go down!

As I listened to Obama's speech from College Green I nearly fell off the couch in surprise when I heard him say that Ireland has one of the best educational systems in the world  and to use that to build  the future.
I am speaking personally now. I have always wanted to be a teacher, ever since I started school myself. But in the past few years I have nearly become afraid to admit in public that I am one. I am immediately berated.
The government has done an excellent job in pitting the Public sector against the private sector in an effort to take the spotlight off themselves. In sometimes appears that it is teachers' wages that has taken the billions that we had a mere few years ago.
Oh, how I wish that was the case!
It sometimes feels that teachers have been put on a level with corrupt bankers and paedophile priests!

It was brilliant for someone to acknowledge that
Hey. We're not all bad and are actually doing our best in an increasingly difficult situation.
So, as I sat in front of the TV correcting my copies, I did not grumble as I usually do
Bah. Humbug. Does it mention all this extra work in the Croke Park Agreement, does it, does it? Eh, eh?
Instead I just got on with it. Which is what we all have to do!
at May 24, 2011 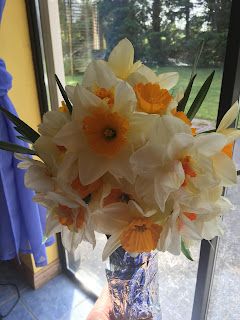