I had finished my 30 lengths of the pool and was struggling over to reach the steps. I looked up to see an elderly man in his seventies standing outside the Ladies dressing room. A young girl of about 12 came out. He spoke to her, put his arm around her and they walked off down the poolside. Because of the warped society in which we live, I was immediately on lookout.
Cop on Noeleen. It's probably her grandfather. There are lots of people around. She has to be safe.
I got out and went to the jacuzzi. I relaxed as the foaming waters eased my weary joints. I could see the girl coming towards me. My "Kerry Katona" eyes means that I can't see very well at a distance.
Signs on it!
As she got in and smiled at me, I did a double take. She was also in her seventies! She had the face of an old woman but the body of a 12 year old
albeit a wrinkly body!.
It was her husband that was with her. Or maybe her lover....after all 70 is the new 50!
I felt kinda guilty about my first thoughts on the situation, but hey, I was being vigilant.
She sat down and we spent a few moments in silence. Then a pool attendant came over with a test tube, took a sample of water out of the jacuzzi and left it standing on the side.
We watched as it slowly changed colour. A thought hit me
"It appears that one of us is pregnant! And I hate to tell you....it's not me!"
She looked at me for a moment and then burst out laughing.  It sounded even louder than normal as you know how sound is magnified in the pool. But then she started coughing and spluttering.I started to panic as I was sure she was going to choke.
Feck. Look what I've done! I've killed her!
Her husband/lover came over to see what was wrong and to help her out.
"Oh John. Wait til I tell you........" She explained as they went off linking arms down the pool. I could hear them laughing as she broke the news of his impending fatherhood.
A warm feeling spread through my body as I realised that something that I thought was so sordid actually turned out to be something so sweet
Or maybe that was just the effect of being too long in the jacuzzi! 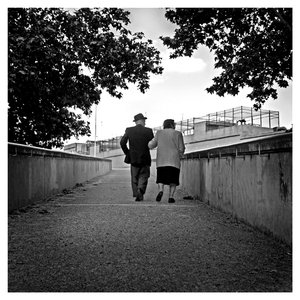