Yesterday's monsoon style wind and rain saw me confined to the house. It was a toss up between housework and watching rugby.
Well, no contest there then!
However the sight of Leinster being annihilated by Northampton by 22-6 in the first half saw me retreating to the kitchen to do my ironing. That's how bad it was!
What must go down as the understatement of the year goes to Brian O'Driscoll.
"There were a few choice words in the dressing room"
and the tables were turned! My backlog of ironing was abandoned in the second half. Leinster's steely grit and determination resulted in the comeback of the century.
Leinster 33 Northampton 22
I know it's only 11 years into this one, but beat that! 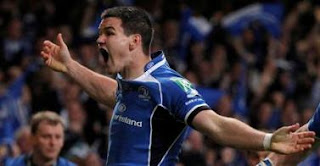 I can understand the opposition's horror at watching their victory being steadily taken away from them. But it didn't account for some of the chanting that was audible to all viewers.
"Never surrender to the IRA"
Fair enough.
"Stand up if you hate the Irish"
Totally out of order. Especially as the majority of people were in the terraces and were standing already, regardless of their views.
It seemed all the more derogatory in view of the giant steps that were made in Irish-British relations this week with the visit of the Queen to our shores. Beforehand, regardless of one's republican views, the visit was seen as an unnecessary event. It would cost us in the region of 11 million euro in security, money our cash-strapped nation can ill afford.
However from the moment she stepped off the plane in her St.Patrick's Blue outfit, she began to win the undecided sceptics over.
How many Irish people actually knew that the official colour of Ireland is blue...and not green! I didn't. 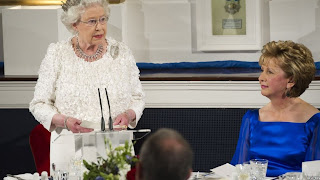 Our President, Mary McAleese was equally poised, dignified and competent. Women rule the world!
Ireland, as a nation, came across to the world as a forward-facing country in which to invest.
Hey, it was even gloriously sunny. Bring on the tourists!
I particularly like one comment. As the queen laid a wreath in The Garden of Remembrance, someone tweeted
" Now the Queen bows her head to those who died fighting for our freedom"
Then as she walked past a group of our politicians, including former Taoisigh, Ahern and Cowen, he quipped
"And now she has just passed the two gobshites who have given it away!"
Our economy is in deep trouble and we need all the international help we can get.

Yes, there have been major injustices done in the past. The British know too little about their history....and the Irish know too much! We must honour and respect our past, but we must live in the present to create our future.
To quote John Home, Noble Peace Prize winner
"You can't eat a flag".
There were protests, as they were entitled to do. That is why we fought to have a democracy- freedom of speech. But unfortunately, wherever you have a group of people with a genuine belief in a cause, you will have a flock of sheep who will say
"Oh look. A protest. Let's throw a rock!"
There were ugly scenes in Dublin. 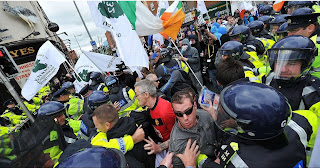 Man demonstrates his hatred of all things British........while wearing a Manchester United jersey. WTF!
Atlas, anyone?

What set me off on that tangent? Oh yes. Let's take it, that in both instances it was the result of a minority realising that they were losing control of the score and reacting in the only way they know how....yobbishness.
This week I am incredibly proud to be Irish. We have shown that when our backs are to the wall and we are facing defeat/bankruptcy in the face, we dust ourselves off, regroup, come out fighting...and WIN!
And all by the rule book!
at May 22, 2011