Did the earth move for you?

On Sunday I went over to Mam's on the other side of the village. When I turned up her road I got the shock of my life when I saw this sign. 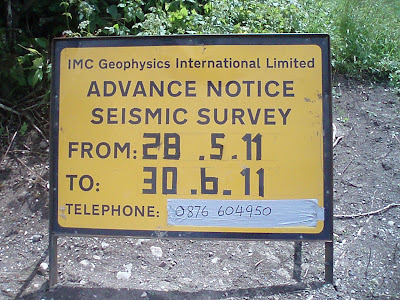 What on earth? Seismic survey? Where do they think we are, Fukushima?
Nothing so disastrous, thank God. It seems there is a possibility that there is an underlying zinc deposit in the area, and the company is checking to see if it would be viable to start mining!
So they were carrying out a tremor test every 10 metres along the road.
Of course what do you do when there is a machine outside your house, causing the tectonic plates to shudder......and glasses to rattle in the cabinet? Why, you go out to the lawn to have a better look! 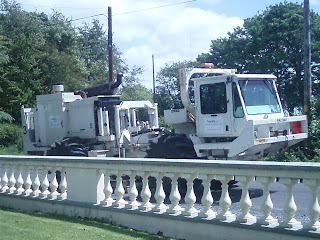 It was a scary experience to be standing on the front lawn and then the whole ground begins to shake. The funny thing was how Ruby reacted to it. Ruby is the second family dog, the one with a paranoid disposition
As opposed to Daisy who has just came off the Valium as she has recovered from her phantom pregnancy!
Ruby disappears under the bed every time the vacuum cleaner appears on the scene.
She should move down to my house, she wouldn't be so traumatised very often!
In fact she has been known to scamper off in fright whenever Niall snaps shut his pencil-case.
So how did she react to a huge machine outside her house, roaring and grinding,causing the earth to move?
She was out, running around and wagging her tail at the nice man who had some sort of gadget against the wall of the house, just to make sure it wasn't going to fall down!
That was nice of him!
Then it dawned on the Lynam clan. What will happen if they actually do discover zinc under their house? Were they devastated at the prospect of being uprooted from their family home and having to leave the memories of decades behind?
Were they heck as like!
They figured they were going to be like the Beverly Hillbillies, make millions from the treasure in their back garden and retire to Dalkey!