Easter holidays are here at last! I am heading to Turkey on Tuesday. Those of you who have been reading my blog since last year will know that I am a professional suitcase packer. In my diary I write down what I am going to wear each day,even what accessories are needed. Every item must go with at least two others in my suit, which means that I have a fully co ordinated wardrobe for two weeks for less than 17kgs.
Well not this year!
I am working backstage on  "Our House-the Musical" in Leixlip, which runs until Saturday night. On Sunday and Monday night it's "Tom and Viv" in Dundrum. And on Tuesday morning its onto Turkey! As a result I don't have as much as a pair of knickers packed. Panic is beginning to creep in.
After school I had to boot it into Mullingar to the bank. There was a Disneyesque queue winding its way in front of me. As I went to join it, I could see a young fella of about 19 leaning on a counter, texting away.
I wonder if he is in the queue. I'll get in front of him anyway. It'll save me at least 20 seconds. Time is precious.
He was having none of it however and he took his rightful place in front of me. Seconds later I heard an American voice drawling behind me.
"Aren't you one of our Olympic boxers?"
Now hold on a minute, I know I have been swimming a bit, but I don't think I've toned up that much!
Oops, she wasn't talking to me, but to Mr.Texter.
He smiled and replied that he was. 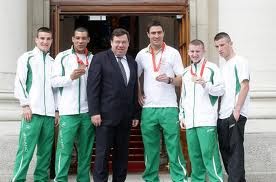 Phew, thank God I didn't challenge him about not standing in line properly!
I immediately was all ears. There is nothing I like more than a good bout of ear-wigging. I love listening into other people's conversations as everyone has a great story to tell. I am also quite good at lip reading. Very useful for catching kids at the end of the classroom not discussing what they're supposed to!
I don't hide behind plants or hold a glass up to a wall, in order to hear what people are saying. All you need to do it stand or sit beside your target and remain inconspicuous. They will rattle on, quite oblivious to their audience.
"Aren't you one of our Olympic boxers?"
"Well, yes. I got to the final nine."
I don't know about you, but I was impressed. I came ninth in the Raharney Community Games 200metre race in 1976 and was very proud of myself. Coming ninth in the Olympics is even better than that!
So I was now very excited about the prospect of finding out what it takes to be an Olympian. I would never have the nerve to go up to a stranger and start asking them questions. But I was sure this woman would have no problem.
But I was wrong. Oh she had no problem talking to him, but it became obvious in the first few sentences that she was more more interested in telling him her story, than in listening to his.
"Oh really. Well when we moved back to Ireland, my three sons joined a boxing club. Two of them gave it up but my eldest who is 33 now kept it up......Now his sons box.....blah, blah, blah.
We slowly snaked around the poles. Bless him. I felt sorry for him. He smiled for a while and then I could see his eyes begin to glaze over. Even I got bored and I am the world's nosiest person! He made some polite reply and promptly returned to his texting.
You would think that this was an obvious hint that the conversation was ended. No! She began again.
"What training are you doing for London 2012/"
Oh, interesting question. Must listen to this."
He stopped mid text and replied
"I'm just back from training in Miami...."
He was cut off at the pass again!
"Oh when I was in America I was near to where Mike Tyson was in jail. I wrote to him and do you know what....he replied! Imagine that. He took the time to answer my letter.
Ah listen here, Missus. HE WAS IN JAIL! What the hell else had he to do to pass the time????
Another polite reply and a return to texting.
"I also have Muhammad Ali's boxing glove......."
I was really astounded at her perseverance. I was even a little envious of it. There have been many times that I have wanted to go up to people that have caught my interest and ask them questions, but have been too reserved/shy/cowardly to do so. She was not giving up, even when it was obvious that her victim had had enough!
We eventually got up to the counters.
He went first....and silence descended in the queue. When he turned to move off, I stepped forward to get served. We made eye contact for a moment.
"Best of luck with your training," I said.
"Thanks a million," he replied with a wry smile.
And that is as invasive as I get!!
at April 15, 2011