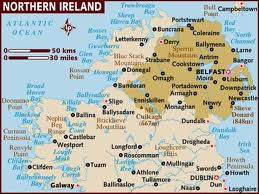 This weekend saw me heading North as we were performing "Tom and Viv" in Tyrone and Fermanagh. Gwen and I set off on Friday afternoon.
It was a much less stressful event than the first time I crossed the border in the early 1990s. A group of us from Leixlip Musical and Variety Group were going to the A.I.M.S awards in Newcastle.
A.I.M.S awards are like the Oscars...only much more glamorous!
Two car loads of us went. The lads were in the first car and us girlies followed. We were very apprehensive as we approached the border as we had never entered the North before. We had only ever seen the news reports of bombings and shootings, and despite the fact that it was on the same wee island as ourselves, it seemed like a foreign country to us.
The lads went through the border patrol first and had no problems. Our turn.
We pulled up to the checkpoint and stopped. Beads of sweat were beginning to break out on our brows.
Having baby-faced soldiers pointing rifles in the direction of your car tends to do that.
The window was rolled down and the RUC officer leaned over and looked in.
Gulp.
"Hello, officer."
He looked at us four ashed-faced women and said
"We have had a report that this car has been acting very suspiciously."
My heart stopped and I could feel my blood draining out the soles of my feet. Stories of the Birmingham Six and the Guildford Four went racing through my brain.
We're doomed.
Who on earth had reported us? The sound of our lads beeping their car horn as they took off, gave a clue.
One minute earlier.
The lads had pulled up to the checkpoint.
"Hello officer."
"Hello there. Where are you going?"
"To the A.I.M.S. awards."
"Fine. Off you go."
"Thanks. Eh...we would just like to say that the car behind has been following us all the way from Dublin. We're no trouble.......but I'd check them out, if I were you!"
The RUC officer looked at our car, spotted four blond women, grinned and replied
"Sure thing. Thanks for the tip-off."
Back to us.
We sat gaping at him. What the hell do we say to prevent us from becoming political prisoners -of -war?
When we saw his mouth twitching we realised
Holy f***! He's actually joking with us. I didn't think they'd have a sense of humour.
We burst out laughing (hysterically, I might add). With a tentative wave we continued on our way.
When we caught up with the lads at the hotel we gave them a well-deserved slap around the ears!
Now, many many years....and a peace-agreement later there was no checkpoint, machineguns or heart attack moments as we crossed the border.
In face the only indication that we had left the Republic was the beeping of a mobile phone with the message
"While you are abroad..........."
So borders are no longer patrolled by armed soldiers, but rather by mobile phone service providers.
And isn't the world a better place?
at March 08, 2011