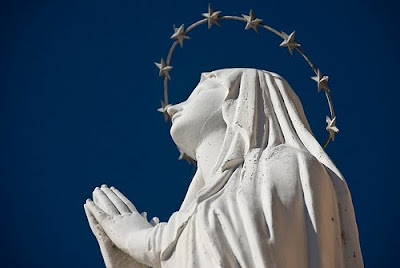 1985 was a remarkable year in Ireland as it was the year that statues moved all over the country. The most famous of these was the statue of the Virgin Mary in a grotto in Ballinspittle , Co.Cork. People reported that they saw the statue rock back and forth and in some cases Mary even beckoned to them. The story was reported both nationally and internationally and people flocked in their hundreds, nay thousands to witness the phenomenon for themselves. The Church remained neutral on these events.

Personally I think that if you stare at something long enough, especially if it is surrounded by lights, as the statue is, then of course it will appear to move. However I am not so arrogant to believe that there isn't a force more powerful than humans out there, so........anything is possible.
Two positive outcomes of the sightings were
a) an increase in prayer
b) thousands of tourists flocking to Ballinspittle, thus bringing increased revenue for restaurants, B&B's and pubs.

Thirty years later I was reminded of this colourful period in our history.
Avid readers (!) of my blog will be familiar with the on-going saga of Joe Dolan's statue.
Last summer it had pride of place in the Market Square, where it was regularly accosted by clamouring women. 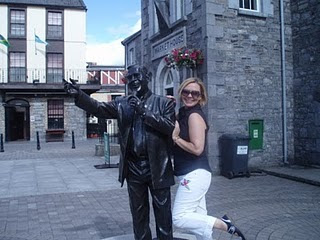 As a result he began to subside on his plinth. So the Council put up barriers around it to protect him.
As if that was going to work!
Gwen and Jenny saw this as a challenge when they came down to Mullingar. After a few minerals (!) they scaled the barriers and had their photo taken in the stealth of night. 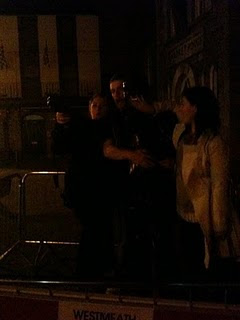 Soon after the statue disappeared. No connection!
The plinth remained empty for several months. A temporary Joe took his place during the Arctic season. But he too disappeared with the thawing snow. 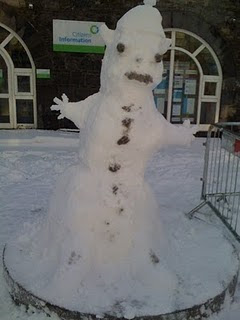 And so once again there was an empty stand where Joe should have been taking his rightful place. Until this week...........
I rounded the corner into the Market Square and stopped in my tracks. HE WAS BACK! His raised arm was beckoning us forth and him holding a sustained note for eternity. I had a brainwave. Lets start our own "Moving Statue" phenomenon. Thousands will flock to Mullingar to see if he will "leg it" again. The square will once more be filled with the sound of merriment and good cheer, as it was in the heady days of the "Bachelor Festival". And if this idea takes off, then we can extend it to the four corners of the country.
After a good tourist season or two, sure we'll be out of this recession/depression for good and the Celtic Tiger shall roar again.
Dam, if I had thought of this sooner, I would have gone up for election. Well it's as good an idea as any of those gobs*"!^& have come up with!