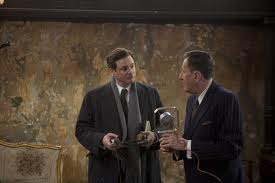 I eventually got to the cinema last night to see "The King's Speech"...........about a month after everyone else! I had heard mixed reports about it.
"It was brilliant!"
"It was crap. Nothing happened in it apart from some old geezer trying to teach another old geezer how to speak."
So I went with an open mind. Any opportunity to look at Colin Firth is not a waste of time.
I am in the former camp of opinion. I LOVED it. So there was no matrixesque special effects or rauncy sex scenes. But the way the relationship between Bertie and Lionel was developed was pure class.
The only other time that I believed the relationship between two men was between Brendan Gleeson and Colin Farrell's characters in "In Bruges". "Brokeback Mountain" doesn't figure!
I had thought that a teacher going to see a film about speech defects was a bit of a busman's holiday. But then again I have never encoutered a pupil who had a stammer or a stutter. These really are a result of fear and terror. Thankfully kids nowadays have so much confidence that it's the teachers who are sometimes rendered speechless.
There was a boy in my class when I was in Primary school who had a very bad stammer. For reading time we all had to stand up in turn and read out a passage to the class. I had no bother with this, seeing as I was a drama queen/show-off even back then. I loved reading aloud, putting in as much expression and pathos as "A Day at the Seaside" would allow! He also had to stand up and read in front of the class, the thinking at the time being that this would help. It didn't. I used to count how many more kids had to read until it came to his turn. When it was about three away I'd get a knot in my stomache thinking about how he was feeling. When it came to him I'd feel sick
That was me. God only knows how he felt.
Everytime he stammered or stuttered, he had to go back to the start of the sentence. I'd will him to get through it. I remember shouting in my head
Don't make him do it again. He's trying his best.
Educational thinking at the time said that this would help his speech. Even I, as a 12 year old child could see that it wouldn't
I was so sorry for him and willed him to get the words out. This had such an effect on me that today in my own class I will never get a child to read unless they have volunteered. Everyone else I hear on a one-to-one basis.
Happy ending: I still meet him regularly in the village and am happy to report that he speaks perfectly. Once the fear of public reading was lifted the stammer disappeared.
Back to the film. Is it worth all the Oscar nominations? Colin Firth was brilliant but even so, for me Geoffrey Rush stole the show.
As I sat in the cinema at the last scene, I was transported back to my English reading class. I was focused totally on every word that Bertie said. I think I was even holding my breath. When he finished I let out a sigh of relief and felt like applauding. Like all the characters in the film I thought the speech was brilliant.
But when I thought about it I realised that I didn't have a clue what the actual speech had been about. I know it was a vital rallying speech of a King on the eve of war,who had to instill patriotism and hope in the hearts of all his subjects. But my whole attention was not on the content of what he was saying but rather on whether he would manage to get the next bloody word out.
And to get me to believe that deeply in the drama of the moment is surely a result of brilliant acting!
Go Colin!!!
Hope his Oscar acceptance speech is less nerve-wracking.
at February 22, 2011