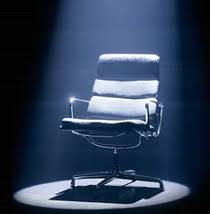 If I were on Mastermind, my specialist subject would be......
Classic chat-up lines of the Twentieth Century.
Many years ago, back in the last century I was in Majella's home place for a night out. Majella and her husband Brian own a pub in Mountmellick, called Dempsey's.
Now lads, could you not come up with something more original than that?
After a couple of glasses of vino in the house we decided to go to the pub. A strange phenomenon occurred. All the locals sent over a round of drink for us. I don't get it. It was her bar, so not only was she getting a free drink, but she was also getting the money that they paid for it! But far be it from me to complain or send back a free drink!
The night was coming to a close. And as usually happens to me, I attracted the attention of the strangest man in the place! He was definitely a lot older than me, was wearing what appeared to be his (very wrinkled Confirmation suit) and his remaining hair was meticulously combed over his bald patch, every rib doing its job.
He sidled up to me, gave a conspiritious wink and said
"Howaya. Do ya fancy comin' badger-baitin' with me tomorra?
I was struck dumb, very unusual for me.
Even now I fail to comprehend how he thought watching a defenceless animal being torn to shreds by dogs would put me in the mood for romance!!!
Talking to Majella at the weekend I discovered that he is still single.
"Why am I not surprised at that?" I sneered. Then it struck me
Who am I to talk? I'm still single myself!!! 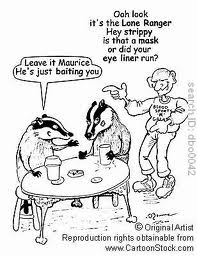