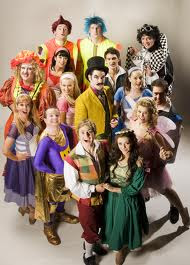 This night's entertainment was Jack and The Beanstalk panto in The Helix. I went along with a gang of fellow members from Leixlip Musical and Variety Group, who shall henceforth be referred to as LMVGers. The writer,director,producer and a lot of the cast and crew cut their panto teeth treading the boards in Leixlip's panto and so we are like proud parents going to our offsprings' graduations! I didn't make the mistake of going along on my own like I did I few years ago!
Its not that they went off on the sly without telling me. It's just that they were going during Christmas and I was in Abu Dhabi for a little holiday.
That's my story and I'm sticking to it!
So I set off to see it just as the run had started. I figured I'd had no problem getting tickets. I went up to the girl at the desk.
"Can I get a ticket for the panto please?"
"Sure. Would you like one in the centre?"
Cool. Perfect view.
What she failed to tell me was that there was no one sitting in the seats immediately beside, in front or behind me! Great, so now it was blatantly obvious to the rest of the audience that I was on my own.
Hey, I'm a big girl now. I can cope by myself!
I threw myself into the show. I am perfect panto-audience material; I sang along, danced,booed and cheered at all the appropriate moments. The show was coming to a close when Paul and Aidan say hello to members of the audience. Paul finished off with the announcement. 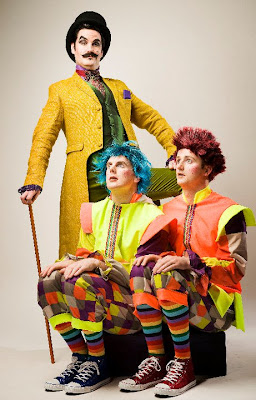 "And finally a very special mention for birthday girl Noeleen who is celebrating her four......ty fourth birthday today. Round of applause!"
People looked at me pityingly and gave me a sympathetic round of applause.
Bloody brilliant. Not only did they think I had to come on my own as I had no friends.....but even sadder, it was my birthday and I couldn't even round up someone to celebrate with me!!!
I felt like shouting
"No, listen. It's not my birthday and I do have some friends. they just happen to be all up on that stage. HONEST!
Back to this year's Jack and the Beanstalk. This time I had partners-in-crime. It was absolutely A-MA-ZING! It was the cleverest, slickest panto production I have ever seen. You know you've had a good time when your hands are sore from clapping and your stomach hurts from laughing.
There was one magical moment when Jack (hero) and Jill (princess) sing a love song to each other. This is what is affectionately known as the "crisp song". The moment there is a lull in the action, the principals get a bit soppy, the bags of crisps come out. The sound of munching and the smell of cheese and onion waft backstage. 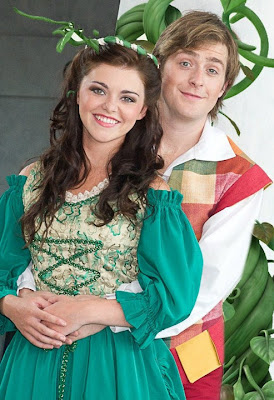 Jack and Jill were giving a touching, heart-wrenching performance when a 7 year old boy who was sitting behind us turned to his mother and said
"Ma, she's gaggin' for it!!!"
Ah the innocence of childhood. How long does it last now..........10 months???
at January 09, 2011