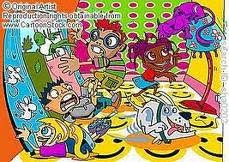 I've tuned into the TV show "Wife Swap" a couple of times. I must admit I thought it was an ENTIRELY different type of show than its title suggests! Very interesting to see how diverse people's approach to family life is.
I was pounding the roads out of it today.
New year's Resolution #1: Get some exercise before your a*%@ meets your knees!
Heading towards me on a similar mission was Helen, my neighbour. Stopped for a chat, which was inevitably about the recent arctic weather conditions.
I thought I was bad being snowed in with just myself for company. But as Helen expounded on about the torture of being stuck in a testosterone-laden house with her husband and her twin 15 year old sons, I realised that I had had it easy! Her house was also without hot water for a few days. When her sons complained about not being able to shower, she handed them the kettle and explained they had to wash in the sink!
Mom! That's GROSS!
Tough.
They became unbearable. Then Helen's sister rang her from the other side of Raharney village, ranting about how her two teenage girls were driving her up the walls.
So they hit on a plan. They SWAPPED kids for two days. The boys walked up to their aunts house and the girls did likewise!
Helen said it was the best decision they ever made. Firstly, they got to see different faces. Secondly, the teenagers didn't dare whinge as much to their aunts as they would to their mothers!
Stroke of genius.
at January 02, 2011