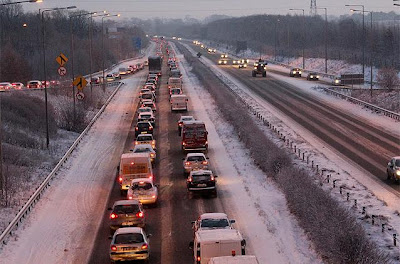 And so the Arctic conditions continue. My nephew Damien works in Dundrum Shopping centre. It usually takes him about 20 minutes to drive home. Last night it took him five hours due to the fact that no traffic was moving. It would be heart-warming to think that this news concerned me only because of my auntie affiliations. However I was more concerned because of how it would affect me! Sorry Damien!
Reason to panic #1
My post op visit was due today...and it was in that very area.I was stressed out, worrying that I wouldn't get back there today and so I would be left with this cursed bandage contact in my eye all over Christmas, and it'd be in so long it'd get infected and then I'd lose my eye...
Okay, so I'm a major drama queen!
Thanks to my FABULOUS sister Jacqueline for driving me there through the blinding snow. In fact we were an hour early! The fact that no one made it through the blizzard (or was mad enough to even try!) meant I was taken straight away.
My doctor told me I had fabulous healing powers
Maybe I can get a job as a psychic healer, if they keep cutting my teacher's wages!
He peeled off my contact with a tweezers (ouch) and off we set home.
You would think my worrying would be over...but no.
Reason to panic #2
Roxy has been parked outside my sister's house for the past five nights. She has never been idle for that length of time. What if she was frozen over and would never budge again???
You do realise that I am talking about my car ....and not my aforementioned FABULOUS sister!!
She purred into life with the first turn of the key. She is obviously in much better physical condition than I am!!
So off we set for home. You would think at this stage I'd be ecstatic at returning home. But no.
Reason to panic #3
I haven't been in my house for the past five nights. During that time there have been record low temperatures of -15 degrees. Even though I had my heating on a timer I began to panic that pipes had burst, water tank had come crashing from the attic and a glacier of ice would meet me on my return at the front door.
Thankfully none of these happened.
This time two weeks ago I was climbing the walls because I was stuck in my house because of the bad weather and couldn't wait to get out of my humble abode. Tonight I am sprawled on the couch inn front of a blazing fire, ever so thankful for my gorgeous, fully-functioning house. I think I deserve a Baileys-on-ice seeing as I had no birthday celebrations.