The Mystery of the Missing Lights. 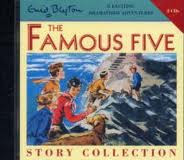 I got my love of reading and indeed writing from Enid Blyton's books, in particular The Famous Five series. I was hooked on their adventures involving underground tunnels, smugglers and deserted islands. Of course poor old Enid has fallen out of favour, as she was not exactly politically correct. One of her girls, Anne, was an absolute wimp and had to depend on the boys to rescue her at every turn. The other girl, George (hello!) only got things done because she insisited on being treated as a boy.
Not good role models for todays girls.
Also her choice of names would raise more than a snigger in a modern day classroom. There was Dick (whose surname should have been Head!) and if I recall correctly, there was an Aunt Fanny in there somewhere! I certainly wouldn't attempt to read that aloud in class.
I was faced with my own mystery today and could have done with their help.
I am on Day 3 of being snowbound in my house and slowly going mad due to cabin fever. What does one do when there is nothing left to clean?
Ah ha! Christmas tree decorating time!
I braved the elements and went up to the attic. When I opened the door, the artic conditions nearly took my breath away.
First down were Santa and Rudolf. 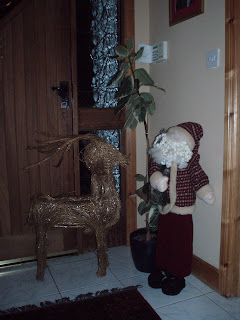 It only seems like last month I was blogging about them disappearing up into my attic for another year.......and here they are again.
That is scary!
Next I set about decorating my tree. I was almost finished, when I realised that something vital was missing....the lights. I went back up in the attic, searched all the boxes. Nowhere to be found! I'm flumoxed. I didn't throw them out last year. I keep all the christmas gear together (Primary School Teacher Syndrome) No one else could have moved them. So where the hell are they???
A mystery! 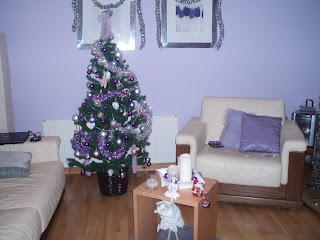 When I was finished decorating the sitting room, I put on a CD of Josh Groban singing Christmas carols, poured myself a Baileys and ice, sat back and gazed at my (lightless) Christmas tree.
I sipped slowly, contemplated deeply and came to the realisation that
If this fecking snow doesn't disappear soon, I'll go mad.
I can't help it if I'm not a Christmas person!
at December 02, 2010