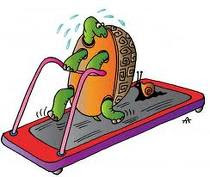 Just entered Week 2 of house internment.
I have gotten worried about myself and my mental/physical health. This is because I have spent the weekend plonked in front of the telly watching "Strictly I'm a Celebrity with the X-Factor Dancing on Ice All-Ireland Talent Show Get Me Out of Here". I suddenly had a flashback to an episode of Nip/Tuck, where an obese woman couldn't move from her couch. She spent her time watching tv and being fed by her family.
Ringing any bells yet? 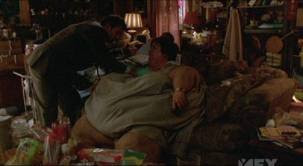 Eventually her skin actually merged with the cloth of her couch and she effectively GREW into it.
They had to knock down a wall, use a forklift to bring herself and her couch to the hospital and surgically separate them.
I was really worried until I realised
Hey, my couch is leather. I'm safe!!!
It did give me a bit of a kick. I haven't been able to go for a swim or walk in the past week. So I resurrected a fitness DVD that I got free in a newspaper eons ago. I managed the warm-up section before collapsing......on the couch.
This time last year I was spending two and a half hours a night dancing about on stage in panto. Once this snow clears it's Operation Fitness.
But in the meantime..............
at December 06, 2010