I had the weirdest dream last night. I dreamt I had eventually made it out in the snow. When I returned I discovered my back door open and my dog Patch was missing! I was really worried because Patch is used to the creature comforts and would not be able to cope in the Arctic conditions outside.
I got a bowl of his food ready. Suddenly I saw something white with two black patches over his eyes, running across the snow in the back lawn.
I know, I know, his name is not very original, but what was I going to call him........Tiger????
I chased him, snow ploughing up behind me. When I eventually caught up with him I discovered that it wasn't actually Patch. Dejectedly I returned to my kitchen.....to discover seven cats crowded around his bowl, eating his food.
I woke up in a panic, thinking that I'd never see my dog again.
There was a moment of intense relief when I thought
Phew, he's not really missing, it was only a dream.
And then it hit me like a ton of bricks.
What are you talking about? Patch died over 35 years ago!
Patch was the family's very first.....and last, dog. We were so upset when he died we never got another one.
When I realised this morning that he actually was dead, I got the same wrenching feeling in my stomach as I did when I heard the first time.
As a result today, despite it being 35 years later, I am missing Patch. 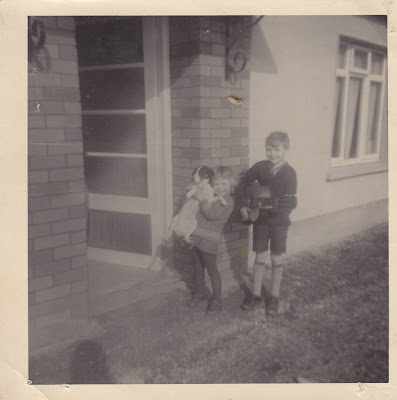 This snow better thaw soon before I lose it completely!
at December 04, 2010