I headed off to County Clare this weekend (despite the artic conditions warning) to catch up with a good friend of mine, Sinéad. We worked together in Choueifat International school in Abu Dhabi for a year. Neither of us was happy there. When we heard that Sheik Zayed Bin Sultan Al Nahyan was opening a new state of the art school, we decided to apply for it.
They said that they were only looking for American teachers, but we didn't like a little thing like that stop us!
After a few gruelling interviews we were successful. As we were the only two on the new staff, including the director and principals, who had lived in the Middle East before, we did the meet-and-greeting with the new teachers and tried to help them settle into their new life.
Just before the grand opening, Dr. LaRae, our principal, was chairing a meeting for the whole staff, when she said
"I'd like to especially thank my two little Irish leprechauns for all their help."
When she saw our two horrified little Irish faces, she knew she had said something wrong.
She called us into her office straight away to see what faux paux she had made.
"In America we view leprechauns as cute friendly little creatures that everyone loves."
We tried to explain that in Ireland leprechauns are viewed as figments of the tourist industry. We see them as being very patronising and add to the "stupid Irish" stereotype. In fact, we probably would have taken less offence if she had said
"I'd like to especially thank my two little IRA terrorists."
I mean, I've no idea where people get that image of Ireland. It's not like we dress up as leprechauns on St.Patrick's Day,eat green vodka jelly from St. Patrick's well, make everyone wear green /dye their hair and force them to do Riverdance. 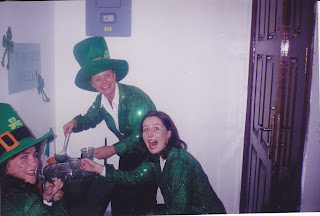 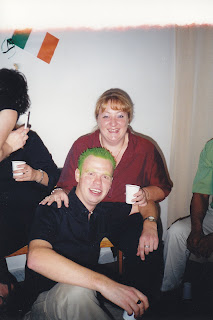 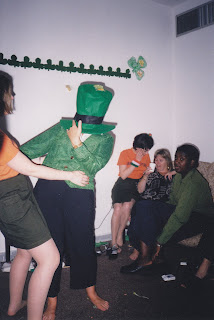 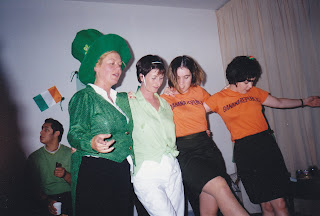 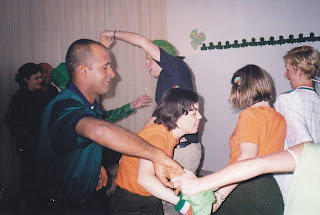 Oh dear, I forgot about that particular Abu Dhabi party!!!

Those were the days. Looking through my old photos has brought back lots of fabulous memories. A big "Hello" to anyone who recognises themselves in the photos. I wonder where everyone is now?
at November 29, 2010