Saturday night saw Gwen and Jenny leave the bright lights of Celbridge (!) and venture down to rural, rustic Raharney. We had organised a Turkey reunion as we hadn't all met up since our hols.Of course there was the obligatory banter about how remote my house is! I was on the phone to them as they were approaching the village and telling them which way to go.
"Oh, hang on a minute Noeleen. We're coming to a bush. Which way do we go? "Tee hee.
"That depends. If it's a Hawthorn bush, turn right. But if it's a Blackthorn one, you have to go left." Very funny.

Taxi arrived, we collected Marese and Emma and headed into Pasta Bella in Mullingar. I know it wasn't a very Turkish restaurant but we discovered a connection. As we were laughing over something that had happened in Mamuthlar, the waiter exclaimed
"I am Turkish. I am from Alayna!" which just happens to be the next town.
What are the chances of being served by a Turkish waiter in an Italian restaurant in Mullingar!

Meal was fabulous and the craic was great. When the bill arrived we had a brief moment of guilt (but only very brief!)


As we were walking across the Market Square the girls were distraught to see barriers around the statue of Joe Dolan.
"But we came all this way to get our photos taken with him. What's the story????"
"So many people have been standing on the podium, it's getting a bit shaky".
"Oh, I see", they replied in a civilised way.

Later that night or should I say morning, as we crossed back, the temptation became too much I'm afraid!!!! 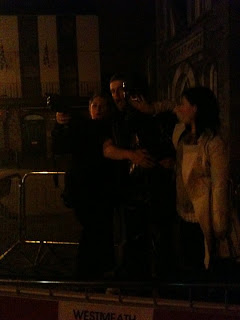