Stuck in a moment 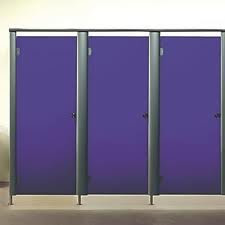 I went to see the play "Bouncers" in Mullingar Arts Centre. Afterwards we met up with the cast in the Green Room as we had worked together previously on various pantos and shows. The numbers dwindled out and the die-hards were left. We had decided to leave but first I needed to go to the Ladies. The toilets were a little way from the main area.
I went into the last cubicle in the deserted toilets. When it came time to exit it, I pulled at the door. Nothing happened. I tugged it harder. The door was stuck fast!
Don't panic, I said to myself as I began to panic!
I put all my strength behind it and it moved approximately 1mm.
This is ridiculous. It's not going to budge. What are my alternatives?
1.SHOUT. No point. I'm too far away from the bar.
2. CLIMB OVER THE WALL INTO THE NEIGHBOURING CUBICLE. I looked at the tiny space between the wall and the ceiling. Even if I had stuck to my Weightwatchers diet I'd never have slithered through that space.
3. WAIT FOR SOMEONE TO COME IN. I was struck by an awful thought.
What if they thought I had continued on home and didn't come looking for me? I'd be stuck here all night!
I began to remember the stories associated with the building. It is situated on Gaol Hill just across from the Court House. In previous centuries, condemned prisoners were brought through an underground tunnel to the old gaol to await execution. So of course stories are rife about the Arts Centre being haunted.
I had always dismissed these stories as being a load of codswallop. But suddenly being faced with the prospect of all the lights being turned out and having to spend the night on my own, made these stories much more plausible.
Just like the Hulk, the adrenalin began to course through my veins. My muscles began to pulsate and expand. Though happily not to the extent of bursting out of my clothes!
I got on my knees, slid my hands under the door and yanked, pulled and tugged. I could feel it beginning to give!
A final gigantic effort.
The door scraped slowly open until it came to the few centimetres. Suddenly it swung open......hitting me on the forehead and sending me flying backwards!
I picked myself up and made a hasty exit, just in case it swung shut again.
I've seen that happen in all the best horror films!
Whan I rejoined my friends, had anyone missed me? NOT ONE!
"Oh you're still here Noeleen. We thought you had disappeared home!"
So I would have been there all night! Shiver, shiver, goosebumps!
at October 25, 2010