"Bye. See you tomorrow," I called to my colleagues,"Have to go to the dentist and get a filling."
"Yeah, right," they said knowingly."Is that Dentist McDreamy?"
I have just discovered the first pitfall of blogging...no secrets!
"Is that why you're wearing those funky shoes?" Marie asked.
"What?"
I had a flashback to that episode of Friends, the one where Phoebe fancies one of her massage clients. He can only see her feet as he lies on his stomach with his face peering out opening in the couch. She gets a pedicure and a cute little toe-ring. When the others see this, they exclaim
"Oh my God...you're toe-flirting!"
I'm far too mature for that sort of carry on!!!
An hour later I was sitting in the dentist chair. He pressed the lever, my head went back and my feet went up!!!! Then McDreamy said the immortal words
"Wow, great shoes!"
I got a fit of the giggles, not a good thing when you are about to get an injection that would numb an elephant's mouth.
Here are the flirting shoes......... 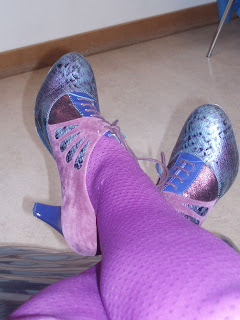 Now I would like to immediately point out that I did not ask Mc Dreamy to stop drilling while I took a photograph of my shoes. I mean, that would be far too weird.
He left the room while the injection took hold. I just reached over and got my trusty camera from my with-in reach bag and kinda just took a photo. There's nothing strange in that....is there???
at October 14, 2010