I'm glad I don't have to write this in Ogham!

"Well done on your History tests. There are just a few answers that I need to go over.
What game did the Celts like to play back in first century Ireland?"
The class chorused
"Fichell, which was a type of chess."
"Excellent. Now they did not play Scrabble or Snakes and Ladders!
N dramatically slapped his forehead with his hand.
"I knew it was one of the boardgames. I just couldn't remember which one."
Seeing as the Celts used a form of writing called Ogham, which consisted of lines caved out on slabs of stone, I'd love to have seen their Scrabble board! 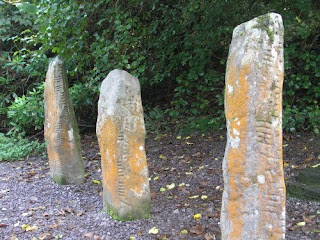 "OK, next question. In the 16th century what plants did Sir Walter Raleigh introduce into Ireland?"
"The potato and tobacco."
"Correct. Now as far as we know he did not bring cocaine into this country."
Bless them. they are still at that innocent stage where they know he brought in something harmful, and in their eyes cocaine and tobacco are on an equal par! 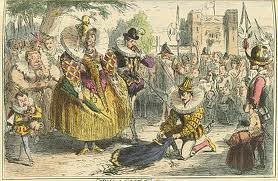 Thinking about it, maybe he did! I mean his cloak was big enough to cover a big, mucky puddle to let Queen Elizabeth walk over. Then I'm sure he could have used it to conceal his haul as he passed through customs!
at October 21, 2010