Sometimes I miss the bright lights of city living and wonder why I've moved to the slow living of village life. Then there are other times when I just love the sense of community that comes with country living. This was one such weekend.

Sunday was the County Senior Hurling Final. I remember our first month in Abu Dhabi. Us Irish were heading to Heroes bar to watch the All-Ireland Hurling final. Our Australian friend Michelle was beside herself with excitement as in Australia, to hurl means "to vomit"! She couldn't wait to see how the teams scored. And when we told her that you got a point for scoring over the bar, and a goal (equivalent to 3 points) if you got it into the net, she shrieked in anticipation! She was very disappointed when she saw the players with hurley sticks hitting a ball around the pitch.

I was watching an American baseball match one evening.....why, I have no idea! One of the players caught the ball from quite a distance and the commentator nearly ruptured an artery, saying how"brilliant,marvelous, unbelievable" the catcher was.

Yeah, he was good. But if that was hurling he would have made the same catch, only while being chased by at least three other men waving sticks in the air, hell bent on hitting that ball, even if it was still in his hands! Now thats skill!

Back to today. Raharney,my village, had made it as far as the final. There was a mounting sense of excitement as the big day approached. It was great to see all the bunting, flags and posters up to wish the team the best of luck. I was driving through the village on Sunday morning when I saw the most fabulous sight. There were three generations of a local family, namely a granduncle, nephew and grand nephew, in the centre of the village, pucking a hurley ball from one to the other. Thats how the skill is passed down from one generation to the next.

How come I could have my camera with me in some random place like the dentist's, but I haven't got it with me when I see something that really should be recorded?


I went into Mullingar to see the match..along with everyone else from the village. Now I do not come from a sporting family. I did play on the camogie team til I was 16. Then the fear of a broken nose/teeth made me give up the sporting life for a life on stage. But when I see the Raharney team I get a, possibly misplaced, sense of pride. It is because our family name Lynam is emblazoned across their chest! Dad's building company have sponsored the team for many years. Granted, it's Billy O'Boyle who was probably responsible for that, but who cares???

I experience mixed emotions when I see all the kids wearing their jerseys. I'm sad because they have no idea who Tommy Lynam was, despite the fact that they are wearing his name. But on the other hand I'm estatic that his name is still out there. 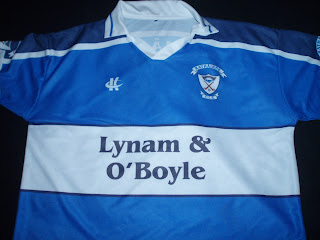 Match was heart stopping stuff. Raharney were winning by four points for most of the first half, only to go in one point down at half time. Two minutes from the end we were five points down and staring defeat in the face. A fantastic goal from Paul Greville meant we were only two points behind.

Then a free for us in front of the goals! Brian Connaughton stepped up to take it. I don't know how any sports person can function under such pressure. If he went for goal and got it, he would be an instant hero. But if he missed, then he would be persona non gratia. In fact he would probably be 80 years old, having a quiet pint in the corner of the pub and someone would go up to him and say
"Why on earth didn't you take your point back in the final of 2010. We could have gotten another score after that, and won. It's all your fault we lost........you gobshite"
Villagers have long memories.
Anyway, up he stepped to the mark. He raised the ball on his hurley and struck it cleanly. All I saw through my fingers was the back of the net rattling. GOAL!
What followed was the longest minute of our lives until finally the whistle blew and we were champions...by one point!
Proud moment. The older man in the picture is my neighbour, Tommy McKeogh. At 87 years of age, he never misses a match, be it U8s right up to seniors. He is definitely our most ardent fan! 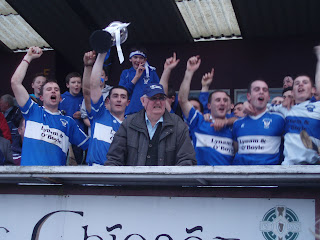