The Lord is my shepherd.

One night in Turkey Emma and I went to Murat's Place as they were holding a Turkish night. After a particularly energic dance routine which I was dragged into, I headed off to the Ladies to freshen up. I went down a corridor, around a corner and then I was stopped in my tracks.......by a painting. Suddenly I was five years old again and in my Granny Lynam's bedroom.
That's where I had originally seen this painting (ok so its not an actual painting but a copy of one). In fact it was my childhood favourite. Granny Lynam told me that it was Jesus as a child and that he was practising being a shepherd for when he grew up.
Years later after Granny and Grandad died the house was boarded up and the painting was lost.
Now forty years later I was looking at an identical one, hanging outside a loo in Turkey.
So is it really Jesus???
It was surreal and so wrong. If my handbag had been bigger, I'd have taken it off the wall and whisked it home, like you do with a nice glass you get in a pub!
Anyway, as the old Irish saying goes
It's strange the pot you find a lobster. 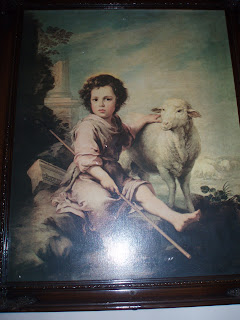