I was delighted to meet up with a good friend Gerardine, who I hadn't seen in several years. We were friends in Abu Dhabi. I came home in 2004, while Ger moved onto pastures new, including Doha,Vietnam and now Kuala Lumpar. She was back in the Emerald Isle for a few weeks and so was on a whistle stop tour to see old friends. Thankfully this included Raharney!
Ger and I first met in Dublin airport in August, 1999 as we were beginning our adventure to Abu Dhabi. We were separated in Schipol airport for the connecting flight, when I was upgraded to Business Class. They obviously knew breeding when they saw it!!!!!
We were only in the UAE a few weeks, when it was Ramadan. I remember we were all very nervous beforehand as we had no idea what was involved. On the evening it was called, the cannon rang out from the palace...and the every bar and club slammed down their shutters and closed for the month!
As we were only in the country a few weeks, we hadn't yet gotten our Drinks Licence. Yes, you read correctly, you needed a licence to buy/ drink alcohol! Depending on your salary, you were allowed to spend a percentage of it on alcohol. A good idea in theory, as it prevented anyone spending all their grocery money on it! However you didn't need one to buy alcohol in a bar or club, so that kinda cancelled that out. However you did need to have one with you if the bar or club was raided by the police while you were there.

You're probably thinking, did you have to pass a drinking test before you got your licence?
Did you have to do things like reverse around a corner while carrying a tray of Guinness....and not spill any???
Did you need to have an experienced drinker with you in order to have a drink!
NOOOO!
You just had to go to a government office, wait three hours, fill out 72 forms, provide 53 passport-sized photos and then hope for the best!
It was three weeks into Ramadan and we had cabin fever. It's amazing the way you can live happily without something....until you're forbidden to have it. Then its all that you want!!
Michelle, a teacher from Australia, lived across the corridor from me. She rang, all excited one evening. Her friend had visited from Doha and had managed to smuggle in a bottle of wine and a bottle of vodka!!! 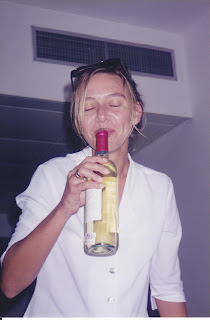 Ah, I had forgotten how good that smells!

Did I want to pop over for a drink?
Is a frog's arse watertight?
Is the Pope a catholic?
Ger and I were around in a flash 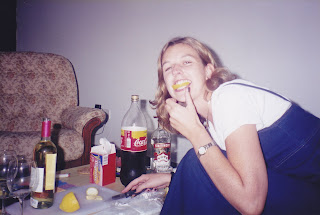 A few drinks later, Michelle told us about a friend of hers who had lived in Russia. A drinking custom there was to take a swig of vodka, eat a piece of garlic and chomp on a cucumber. It seems this acted on all taste buds, and gave an extra rush. For some bizarre reason, we seemed to think that this was a great idea and I headed across the corridor to raid my vegetable rack. I ran back waving a cucumber and bulb of garlic, much to the consternation of our Filipino neighbours. 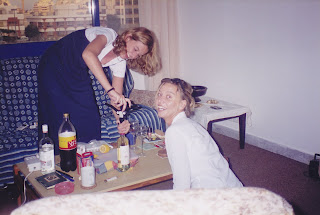 We tried this new drinking game. It provided a rush all right....a rush straight to the bathroom! It was definitely a bungee drink.
Down, down, down and boiing......straight back up again!!!
Do not try this at home! 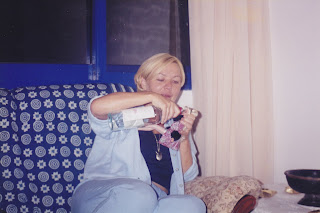 Contrary to her publicity, Barbie was no fun and had to be coerced into joining in our drinking game!