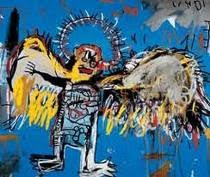 On the 12th August 1988 Jean-Michel Basquiat, the graffiti artist in Warhol's circle, died of a drug overdose. I am not familiar with his work, if the truth be known I'd never even heard of him before today. I have of course heard of Warhol. Just wondering when my 15 minutes of fame is going to come along.

When I was living in Abu Dhabi, one of the sheiks loaned his paintings, which included several Warhol pieces for an exhibition in The Cultural Foundation. Art exhibitions and concerts were a bit thin on the ground. As the city of Abu Dhabi was only thirty years old at the time the most historic building there must have been Marks and Spencers!

So Alexa and I headed in to see the exhibition. When we entered the hall the first thing that struck me was that there was no one there.....and I mean no one, not even a security guard! i almost expected to see tumbleweed blowing down the hall. As we passed the reception table we saw some papers lying there. So we had a little nose, as you do! It read
#1 blah blah blah $1,000,000
#2 blah blah blah $5,000,000
#3 blah blah blaheddy blah $8,000,000
and the list went on and on.

We stared at each other opened-mouthed. I have never been that close to such wealth! This must be how Aladdin felt when he wandered into The Cave of Wonders.
But to really cap it all, I saw that the two emergency doors at the end of the hall were wide open !

Within seconds I had the heist of the decade planned in my head. Ocean's Eleven here I came. I would get a van to back up to the open doors, a gang of us would jump out and clear the place in a matter of seconds and then speed off into the horizon. We even had perfect disguises at the ready. Even though we didn't have to wear muslim dress, we all had an abaya in our wardrobes....in case we were invited to a palace or something! So who needed balaclavas?But why didn't we do it? For exactly the same reason no one else would even attempt it either.......the punishment if caught. As far as I can see, everyone is quite attached to their hands,legs,heads or whatever and wishes to remain so!
The forms of punishment in some parts of The Middle East are barbaric and yet I'm afraid to say it but I think that in some cases they may have an incy,weency, miniscule point.

In Ireland over the past few years there have been some horrendous crimes carried out against the most vunerable members of our society, namely the elderly who live alone. Thugs looking for quick cash for drugs break into their houses and threaten them with boiling water, beat them up, rape and torture them for where they think they have hidden their life savings. Several elderly people have actually been murdered in their own homes for a few euro. Those who survive live the rest of their lives in absolute terror of it happening again. These people who have worked hard all their lives and deserve to live their final years in comfort, end up living in a self-made prison afraid to open their doors to anyone.

The law in Ireland can be crazy. It is only last month that a law was passed to say that you could defend yourself in your home if you were attacked....yippey dodah! Up until that, an intruder could sue you if he fell on your property and injured himself. Please!
They know that the law is more on their side that the victims. And even if these b******s are caught they know that all they will get is a few years in prison or even more unfair, a suspended sentence.

I know its not very Christian of me, but I can't help thinking that just one little beheading would make the rest of this scum think twice about doing this again.