The Good,the Bad and the Ugly 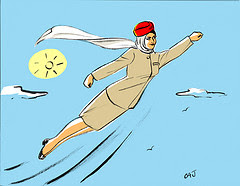 As my brother was kindly leaving us to the airport, I arrived at his house at the ungodly hour of 7 in the morning. Roxy (my car) was spending her hols there as I was afraid of what she would get up to if I left her on her own at my house for two whole weeks!

There were a few moments of panic on the journey up, as we kept running into patches of thick fog.

OMG. What if our flight is grounded because of that dammed fog?

A discussion ensued as to why a plane can fly through clouds using radar despite the fact that the pilot can’t see in front of him, yet that doesn’t apply to fog, which is technically only very low cloud? I suppose it is handy to be able to see the runway!!!

Flight took off an hour late. Emma and I had the seats in the very last row. I wasn’t happy with this for two reasons.

a) Sometimes the back seats are very cramped. Not the case here. There were only two seats instead of three and we actually had more room.

b) The back of the plane is reserved for ugly people! Anyone who has seen Lost will testify to this. Series One was all about the passengers in the front end of the plane, namely Jack, Kate and Sawyer. Beautiful people. In Series Two they met up with the poor unfortunates who had been in the rear of the plane....all ugly!

We definitely took the Bog road to Turkey. Maybe it was because we were at the back of the plane but there were a lot of unfamiliar noises. We were only speeding down the runway before take off and Emma looked at me and said

“Well, lucky it did while we are still on the ground. We’d be in right trouble if it did in five minutes time when we’re airbound”

There was a serious amount of turbulence. I’m not a nervous passenger at all but there were a few Lost moments! I don’t mind it when the plane goes up and down a few times, but I begin to get wary when it starts to roll from side to side.

That’s it. We’re going to crash and I’m going to be one of the Uggers!

One airhostess was definitely missing on the day that they gave the lecture on Customer relations. She was the rudest hostess I ever encountered. I asked for tea at one stage. She gave me a paper cup full of boiling water, a teabag and a swizzle stick. I swizzled....and then didn’t know where to put the used bag. (tea...not airhostess) Being a considerate person, I took out the sick bag and put it there to prevent staining the tray/floor/me! When she came back she looked in horror. I tried to explain that I hadn’t vomited into it, I just had nowhere else to put the teabag because she hadn’t given me anything! She tutted like Skippy and stormed off.

Employee of the Month, then Ted!

Despite threat of fog, Ugger seats, turbulence and Attila the Hun nothing could dampen our spirits. We arrived at the apartment, dropped the bags, had a quick shower and headed out on the town.