Despite spraying ourselves with foul smelling insect repellent (that could stop an elephant in its tracks) Emma still managed to get two nasty mosquito bites on her ankle. Then when she got a large swelling above her knee I decided that it was time to go to the Medical Centre. When she protested a little, I said

“Listen. I know it’s every woman’s dream to be like Cheryl Cole, but let’s not go down the malaria route!”

We were a little worried about what we would find there. You tend to think that these countries are less developed than ours and so their medical service will be appalling. Well.......I wish Mary Harney would take a visit out here and see what service they supply.

The building was like a hotel. The reception area had plush comfy armchairs which we had barely time to seat our bums on, as we were seen immediately.

No waiting on hard plastic chairs here for six hours until you’re finally seen by an intern who has been working for 36 hours....or something ridiculous like that!

We were ushered into Dr.Fahi’s consultancy room. Again, thumbs up to the interior decorator. He arrived in, all Adonis like....big chocolate brown eyes and sweeping black hair. I was immediately brought back to my Mills and Boon romantic novel days. All he needed was a square jaw line and he was complete!

He examined Emma’s lumps and bumps and diagnosed that she also had an allergic reaction to just about everything. She needed a drip to clear the blood infection. All of this was directed at me but we were used to this by now. Everyone here assumes that I am Emma’s mother and that she is about 16 years old...not what any 22 year old wants to hear! However I try to convince her that there will come a time, and not too far away, when she will be delighted to look 6 years younger than she actually is.

Off we went to room no.3. This had two comfy beds and a plasma tv. Emma lay on one (the bed, not the TV) and the nurse came in to attach her up to the drip. This is when things took a turn for the worst. She put in the first needle to take blood for tests. (The results of which we got in an hour, as opposed to a week......Mary, once again take note!)

Then the nurse put in the drip needle. I was sitting on the other bed, chatting to Emma to keep her mind off things. I got a bit worried when the nurse made an “oops” face. There was quite a flow of blood out of Emma’s arm onto the sheet.

That’s not supposed to happen.

Blood stopped flowing and things returned to normal. Until cleaner came into the room and started to berate the nurse. We took it, it was over the state of the sheet.

I had a little lie down on the opposite bed while we waited for the drip to take its course. Within 20 minutes the bites and allergies had disappeared.

On the way home we went into Foleys Bar, well we just couldn’t pass it. We were telling our story to them. Adam, the head waiter, was raging about the needle and said that we should have gone to him! As he was in command of a group of soldiers when he was in the army, he was trained to give injections, as they were stationed up the mountains....and someone had to be able to do it. In fact, he proudly explained, he now gives injections to all the bar staff when they need them!

“Ah Doctor, I don’t need the flu injection this year. Didn’t I get it from the barman last night!”

The next day we had to return to the Medical Centre to check that all was well. Dr. Fahi pronounced that all was practically clear. Emma just needed an injection to completely get rid of it. He smiled, left the room, and in came that nurse again.

I looked at Emma, Emma looked at me and we both mouthed at the same time

“Where is Adam when you need him!” 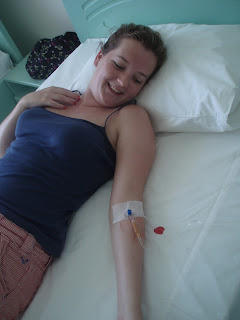