Don't back a Prince, put all your money on a Banana man!

Last Sunday after Granny's mass we went back to my Auntie Angie's house for tea and sandwiches. The previous night I had gotten a tip for a horse, Prince Erik, from my sister Jacqueline (gosh, we are beginning to sound like a family of gamblers, but we're not, honest!) I know that Angie likes a little flutter now and again. So while every else was having a chat over a cup of tea, we legged it off to the bookies. To our embarrassment we were five minutes too early, and so had to hang around outside until it was open. Classy chicks!
Once we got in, we had a look at the racing cards on the walls. Yes, there was Prince Erik....but then another name jumped out at me. I thought it said
"Banana Man"
but on closer inspection it said
"Banna Man".
Even so, it struck a chord with me.
On the first night on holiday in Turkey two years ago, a local guy came into the bar. He took a shine to me and practically cleared a table to sit beside me.
He told us he had a banana plantation (probably two trees!) so we christened him "Banana Man".
He didn't know the meaning of rejection. Every night he asked me out and wouldn't take "No" for an answer. This went on for two years of holidays....... 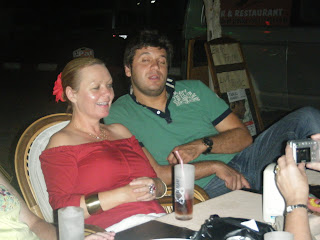 So seeing the name on a racing card, I just couldn't resist it. I figured it was worth a fiver each way!
I have just checked the results. Prince Erik fell.......and Banna Man romped home in first place, earning me 60 euro! I have just realised that I have been using the wrong method to pick horses. I have been carefully studying form, where they came in the past few races, looking at the trainers and jockeys. WRONG!
I will now back any horse that happens to sound like
a) an ex boyfriend
b) an unrequited love
or
c) a stalker