During the week we had a girlie night in to watch the finale of "The Tudors"....mmm, Jonathon Rhys Myres, wine and nibblies. What more could a girl want? My sister-in-law, Marese was very thoughtful of my dieting requirements and brought a box of Weight Watchers Lemon muffins, at only 1/2 point each!
Programme was about to start so I went to the kitchen to open the wine and the muffins, and I got a shock! 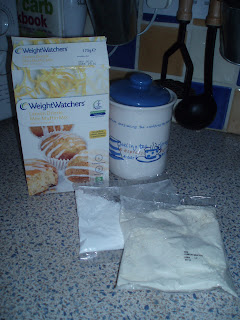 The box was full of packets of white powdery substances.
What? Has Marese turned into a drug-dealer???
PHEW! Nothing so dramatic. It was a box of muffin mix. The muffins were still in packets and needed to be baked. Well "baked" is perhaps too strong a word. It involved adding water and popping them in the oven for 10 minutes. However time was of the essense. It was a toss up between cooking in the kitchen or watching JRM in the living room...no contest.
So we actually saved WW points by not eating any muffins...and promptly spent them on guzzling wine! Well I'd hate to get too skinny too quickly!
The next day I took to the kitchen to do the baking. Oh my God, no wonder there was only 1/2 point in each muffin...they were TINY! Here is one with my thumb, not Shrek's thumb! 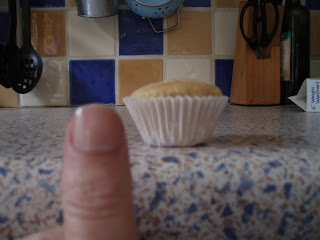 They tasted lovely. However I had to eat the 12 of them to fill me, so that kinda defeated their purpose! 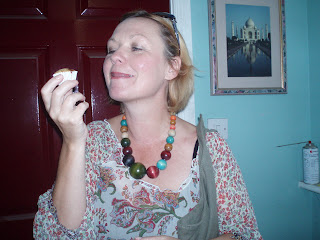