My class headed off to The Helix theatre in Dublin to be part of the audience in the filming of a talent show called "Who are you kiddin?" There were hundreds of children milling around. I got mine lined up and I went up to the desk to register. There was a young fella in charge. I swear I have bras older than he was!
"Hello, we are from Baconstown school"
He looked at the list, and like Santa , he checked it twice! Nope we weren't there.

Noooo..it can't be a repeat of the Strictly Come Dancing disaster. I know it was today, as a lady actually rang us back to ask us if we could come on the afternoon of the 9th, instead of the morning. I have the right day, I know I have!

He searched again and again. I could see the sweat beginning to come out on his fervored brow. A teacher from another school came up, and encountered the same problem. It seems that "Sharon" had been in charge of the bookings but had left two weeks ago. Somehow our names had been lost in the transfer and now there where a total of 80 kids without seats. Our buses wouldn't be back for three hours....so sort us out Sonny.

After a delay of 45 mins the best they could do was give us fifteen seats each. The others could watch it via a live link in another room. It was better than nothing, just about. We put the names into a hat and I gave out the Golden tickets.

That left myself and Ms Student teacher with 30 kids who had nothing to do for three hours!. We went to the room with the live-link, but the tv was the size of an envelope. They couldn't see it or hear it, so we came out.
I managed to wrangle a free drink and small can of Pringles for everyone. And we waited......
When some of the kids got so bored they asked could they do some of their project (they had their schoolbags) I decided it was time for action.
How on earth could you do school work on a day trip????
I asked them for suggestions as to what they could do.
One redeeming fact was that the theatre is on a university campus. So it was pretty enclosed with no through traffic. A teacher's main concern is health and safety.
M thought and suggested
"Well if we had a sliotar, we could play hurling"
"What else could we use?"

When I saw them tearing after a Pringles can with hurley sticks, I thought.

An adult says " We don't have a hurling ball so we can't play hurling."

A child says " We don't have a hurling ball...so let's use a can of Pringles."

Luckily I got talking to a worker who told me there was a park and a playground just down the lane and around the corner. HAPPY DAYS. I wasn't sure how my 12 years olds would take to good old fashioned swings and slides. These were the kids who had wanted to bring their Wiis with them..
"What do you need them for?"
"What else will we do on the bus?"
"Eh, talk to each other or sing songs....."

Off we set for the playground. The kids took off once we reached the gates and proceeded to have the best hour and a half of the school year. I taught them every ancient playground game I could remember......Queenie-I-O; Hopscotch; Statues. We had relay games up and down the climbing frame, which I won. Well I did give myself a head start. It's a teacher's prerogative to cheat! 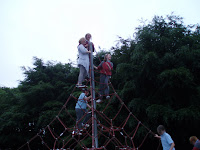 Several hours later we were on the bus home. I don't think I've ever been so exhausted. A mixture of physical exhaustion after the playground and mental stress after trying to keep 30 kids safe and entertained for so long. Kids were on high doh.

"Miss, that was brill. Can we do that again for our tour next week?"

Over my dead body!