Myself and the girls/women from the Musical society went out for the night...to the cinema! As we approached the ticket desk you could see the cogs turning in the cashier's brain.
"Six women of a certain age. I guess it's Sex and the City then."
You should have seen the incredulous look on his face when we said,
"Six tickets for......Streetdance-3D."
I know we didn't have a hoodie or a pair of trainers between us, but age has nothing to do with dance appreciation, plus the fact that we would all "do" Ashley from Diversity!!!
I can hear Ella, Anne's daughter who was also with us, complaining that she is not one of us "aul wans". I would just like to remind you Ella, that although you may have studied dance in a London College, there was a time when you and Lynn had to dance behind myself and Emer on stage, as we were the front line dancers. Ah, those were the days...
Back to the film. The script was deplorably clichéed, the plot was lame and as for the acting....I've seen more feeling and pathos in a Junior Infant nativity play! But the dancing was dope. See I managed to pick up some of the hip street language. And I know that even using the word "hip" has renegated me to the last century, which is ok. That's only ten years ago!
As we left the cinema, we performed a few of our own dance moves down the stairs and out the door. we have already planned our next night out. Guess what film we are going to see....if they let us back into the cinema! 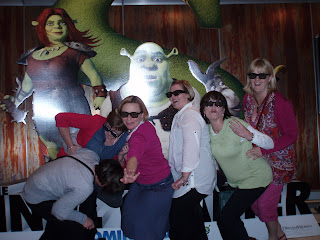