Celtic sisters were doin' it for themselves! 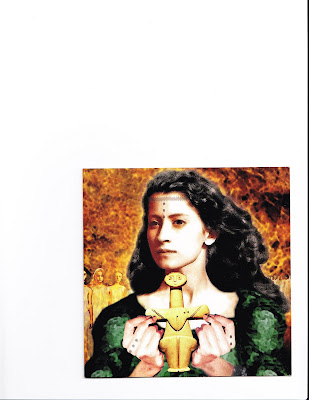 I went to my favourite place in the whole world yesterday...Belvedere House and Gardens, just outside Mullingar. I love to walk around the picturesque lake, through the woods and in the walled garden. There was an exhibition of Celtic mythology in the reception area. Suffering from PSTS (Primary School teacher Syndrome) I just had to have a look and see if there was anything I could use in school...despite the fact that I AM ON HOLIDAY!

It was mainly the same old legends, you know the ones about ramming a sliotar own a dog's throat, killing him and then having to take his place! Or where the evil stepmother turns kids into swans and that is why it is still illegal to kill a swan in Ireland today. All the nice bedtime stories we tell to our children!

However I did encounter this fascinating legend which I hadn't heard before. In the mythological history of Ireland Ceasair was the leader of the first people to come to the country and of the first ever settlement. She is portrayed as a land goddess and her name would mean "shower of hail". It is claimed that she was the granddaughter of Noah and came to Ireland to escape the flood.

She obviously never listened to the weather forecast for here then!

She was looking for a place where no people had been before, where no evil had been committed and that was free of snakes and monsters.

Just as well she wasn't thinking of coming today!

Ceasair arrived in the Dingle peninsula in Kerry with 50 women and three men!

She then went and married one of the men, the shamen Fiontainn.

Now I'm really curious. Did the 51 women continue to share the 3 men equally....17 women to one man? Or did Ceasair get greedy and keep Fiontainn to herself and let the other 50 women make do with the two men?

I think it must have been the latter because didn't the two men up and die! It may have been due to

b) nagged to death

Whatever the reason Fiontainn was now on his own. I think that if this was a story from another culture, if for example, our hero was Italian, French or Greek, he would have given it his best shot to satisfy everyone. But not our Fiontainn! He did what every Irish man does when faced with a dilemma involving women...he fled!!
Oops am I being controversial here? Tee hee!
Poor Ceasair was heart-broken and died.
It doesn't tell us how 50 lone women went on to populate this island of ours.
I like to think that there was a passing ship filled with lusty sailors who had been at sea for a year. They got shipwrecked off our coast, swam ashore, were met by the sex starved women and Bob's your uncle! The rest, as they say, is History.
However I don't think I could teach my version of how the Irish race came into being. Drat!
at June 30, 2010