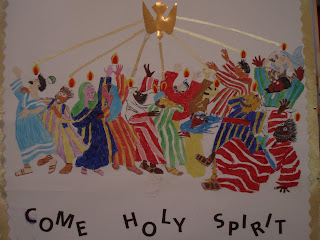 It's Confirmation season again. My 6th class have been preparing all year and I can't believe that the time has arrived. Despite knowing the date of the event all year, there was still a bit of a panic getting the school poster ready on time. As Baconstown school is relatively small, we join with two other schools for the ceremony. There is always a bit of (healthy) competition over whose display is the best!
This year we used a picture from the children's book, projected it onto the chart paper and all the children either drew (ie traced) or painted a character. So it was a nice communal effort.
On the afternoon before Confirmation I carefully loaded the poster (which was quite large) into my car and headed off to the church to put it up. DISASTER!
For some unknown reason the red and blue paint had flaked off in transit! Maybe it was old paint..in these recessionary times schools use whatever we have. Whatever the reason, some of my apostles had lost their robes and were now in the nude! And as you can see we had managed to slip in a few females into the picture as well. Hey, if Leonardo da Vinci could get away with it in The Last Supper why couldn't we? And if Dan Browne is reading this he might get inspiration for his next novel...although The Baconstown Code doesn't have quite the same ring to it, now does it???
However, a teacher is always prepared. I whipped out a red and a blue marker and did a bit of doctoring up. Bet you can't tell from the picture!
And so a scandal was averted...which the Church can well do without at the moment.
at May 15, 2010