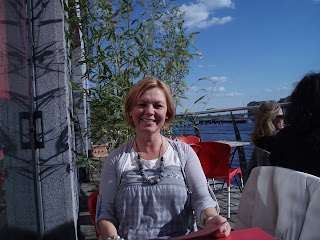 According to "A girl for all seasons" I should be in Cannes for the Film Festival.... I wish! Especially as the opening film is Robin Hood, and I heart Russel Crowe!!!
I did make it to the next best thing, the All - Ireland Drama festival in Athlone. Our play made it through the preliminary drama festivals to reach the final nine. However our winning streak came to an abrupt ending. The adjudicator didn't like the actual play and so didn't give us a
look-in in any category. We didn't even get a nomination : (

There is a tentative link between Athlone and Cannes..apart from the fact that they are both situated near water. One of the backstage crew has a brother who is working as a bodyguard in Cannes this week. Although I was told that the correct term is "Personal Security Guard". It seems that the term "bodyguard" is too much like "bouncer"!

The weather was glorious. Anne and I sat outside the Olive Grove restaraunt on the banks of the Shannon sipping (ok, it was downing) our vodkas! We actually could have been in Cannes, minus Russel unfortunately.
at May 11, 2010