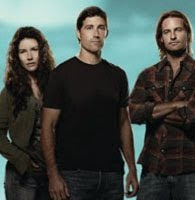 After six seasons and God knows how many episodes, Lost was finally coming to an end. I was a major fan for the first two seasons. I loved how intricate it was, and felt chuffed with myself every time I noticed a teeney-weeney clue in the background. Then it got far too weird for me. All this sideways time travel was WAYYYYY too confusing. It got back on track for the last season.
Having stuck with it for so long, I had to see it through to the bitter end. Sky 1 were showing it simultaneously with American tv, which meant I had to get up at 5am...on a Monday morning. But I couldn't risk waiting to watch the repeat on Monday night. Knowing my luck I hear or see a spoiler during the day.
So 4.55am saw me cuddled up on my sofa under my duvet. It's at times like these I'm sorry that I refuse to have a tv in my bedroom...electronic emissions during the night, and all that jazz! The opening credits started and then......DISASTER. The screen went blank and the message went up Temporary Fault.
Someone in Sky must have been having a major cornory. All I could think of was that I'd gotten up at that inhumane hour for nothing. Thankfully it was restored within seconds.
I won't go into all the details. I was left kinda confused even at the end of it. It reminds me of the time I tried to read James Joyce's Uylesses. I spent ages agonising over the meaning of every sentence Many sentences later I gave up as I realised that I had no idea how these individual sentences went together to form the plot of the book!
Will probably have to get the box set of Lost and rewatch it, bearing in mind what I now know! But I won't do it this week!