Not quite the Oscars....but close! 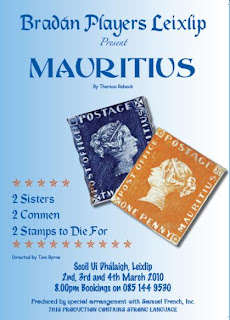 According to "A Girl for all Seasons"
Getting invited to the Academy awards (in your own right and not as someone's arm candy) is tough, in fact close to impossible.
Well I'm not fussy. I waited..and waited for George Clooney to call but all in vain.
So I did the next best thing. I joined the backstage crew for Bradan Players' production of Mauritius as they go on the All Ireland Drama circuit.
Last weekend saw us up North in Enniskillen and Derry. Lots of drama both on and off the stage resulting in two fab performances! We won in Enniskillen and also got the audience award and the best overall play. All the actors were nominated. We came third in Derry and got best stage management (go us!)
Onto the bright lights of Kildare on Wednesday where Jenny got best actress and Gillian got best supporting actress.
Looking good for reaching the All Ireland finals. So all I can say is
George, if you are reading this, don't bother ringing me now trying to get an invite. Too late!!!
at March 14, 2010