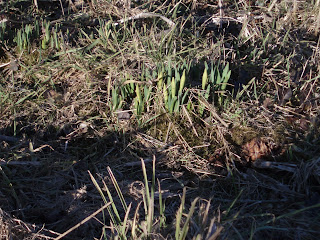 As today is St.David's Day, it was my mission to find some daffodils! I set off on my walk after school. This might seem like an easy task but believe me, it wasn't. I'll set the scene for you. I have just returned from a rugby weekend in Twickenham, a match which Ireland won!!!!! When my brain informed my body that I was going for a nice walk in the Spring air, my legs cried out in horror. All they wanted was a nice cosy bed. But I marched on...well, more of a stroll really!
I knew that there had been "a host of golden daffodils" outside a neighbour's house last year, so I headed there. Alas, the snowdrops had made a glorious appearance, but the daffs had just managed to break the surface! Not to be deterred, I took a photo of what was there so far. I will monitor their progress over the next few weeks.
As I was kneeling down taking the photo, it occured to me that my neighbours were probably peering out the window saying
What on earth is that mad one from down the road doing, taking a photo of......nothing????
at March 01, 2010