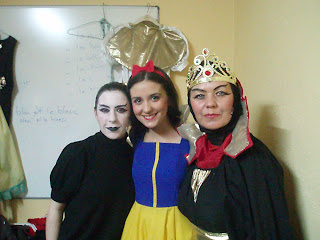 I have taken part in enough pantos in my life to appreciate a good old fairytale. For some unknown reason I seem to have been typecast as the wicked stepmother/queen. No idea why!
This is a photo from Leixlip Musical and Variety Group's production of Snow White in 2008. I was given the part of a vain, conceited older woman who tries to poison the younger, prettier opposition. I mean, I had nothing to work with!!!
I looked up Sleeping Beauty on the internet and it made for very interesting reading. In the original story the prince raped the princess while she was in her coma and she became pregnant. She gave birth to twins. One of them sucked the flax from her finger and she woke up. However her problems were only beginning. The princes's wife discovered what had happened. She ordered them to be killed and served up for dinner. Luckily a kind chef (obviously not Gordon Ramsey) took pity on them and served up three animals disguised by some sauce..some very special sauce. They escaped and all lived happily ever after.
A story based on rape, adultery and cannibilism.Somehow I can't see Disney filming that version!
at January 05, 2010