Something I've heard about but never attempted, even in my capacity as a professional dieter, is the Cabbage Soup Diet. Seeing as it's in the book, I'll give it a try.

1/2 of a dark green cabbage

Cut all veg into small pieces, or blend. Place in a saucepan with all the other ingedients, cover with water, season and simmer until vegetables are soft.

It says to eat this for the week. However a major side effect is flatulence!! Now I'm really worried, especially after my recent encounter with Daisy. 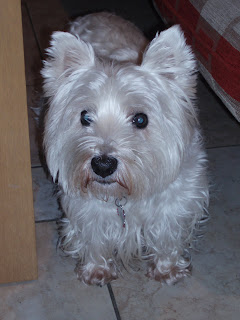 Daisy is Marese (my sister-in-law)'s Westie. I was sitting beside her (Daisy, not Marese!) on the couch one evening, casually watching telly. Suddenly there was a whiff of something vile! I nearly passed out. Marese explained that she had been feeding her some leftover turkey and hence the digestion problems. Seriously, if George Bush was still in power and got a whiff of that, he would invade us as well, looking for weapons of mass distruction!

I don't want to end up in the dog house along with Daisy, so I'll just try the cabbage for one day. Just stand up-wind from me!!
at January 03, 2010